Review: "A must-see for anyone who wants to learn about stem cell biology"

On the Node, a community site for developmental biologists, Claire Cox just wrote this review of STEM CELL REVOLUTIONS:

"My first thought after watching Stem Cell Revolutions was: wow, is education supposed to be this entertaining? Although I have been working in the stem cell field for a few years now, I learnt a lot from watching this film..."

Unlike other posts you may come across on 1 April, this is no joke: Our film has just won at the Vedere la Scienza Festival in Milan. Here's what the international jury had to say:

"The prize is given for the relevance of the subject, the effectiveness and the elegance of the animations, which well illustrate complex concepts. The documentary recounts the evolution of the stem cells studies in a clear and precise fashion, with an interesting description of the relationship between researchers, physicians and patients. The current clinical applications and their ethical implications are openly and honestly discussed. Interesting the introduction of the point of view of a well known writer."

STEM CELL REVOLUTIONS will be released on DVD and online very soon. Make sure you've signed up to get notified.

The winning films will be screened again on Tuesday 3 April.

Amy Hardie, the Scottish filmmaker who collaborated with scientist Clare Blackburn on STEM CELL REVOLUTIONS, now has her own blog called Amy on the Edge – the title a reference to her acclaimed documentary, THE EDGE OF DREAMING. She's focusing on "life, death, and the power of the unconscious".

It would be great if you could have a look and let Amy know what you think.

Be the first to know about this film's release

STEM CELL REVOLUTIONS will be available on DVD and online very soon.

Sign up here to register your interest, and you'll be the first to know when the film becomes available. Thanks!

Coming up: Festivals in Ireland and New Zealand (Update: We're a Finalist!)

UPDATE: ScienceTeller have just announced the finalists in the documentary competition, and we're one of them. Keep your fingers crossed for us!

If you're in Scotland and you haven't seen our documentary yet, you'll be able to catch it at Dundee Contemporary Arts on 10 November, as part of the Dundee Science Festival. We've just updated the event details.

Review: "A fascinating, unsensational and complete guide... the film raises the bar for science documentaries"

"[The film] is the behind-the-scenes story of each major advance in stem cell science leading to present-day scientific and clinical developments. The result is a fascinating, unsensationalised and complete guide for anyone who wants an informed appreciation of stem cell science and an understanding of what all the fuss is about."

After a summary of the chapters of the film, the reviewer concludes:

"Despite these minor criticisms, the film is clear and interesting. It fulfils its aim 'to present the 'real science' of stem cells and take the realities behind hopes and fears associated with stem cell research to the cinema and TV audience' and raises the bar for science documentaries."

The reviewer particularly liked the role of novelist Margaret Atwood in our documentary:

Hot off the press, here's a very nice review of STEM CELL REVOLUTIONS posted by David Kent on the Stem Cell Network blog.

"A prize-winning author sits down in an Edinburgh pub across from a world famous stem cell biologist. Together they begin to ponder mankind’s desire for eternal youth. Though it may sound like the first lines of a joke, it is the opening scene of a documentary film, supported by the UK’s Wellcome Trust. Oddly enough, this film represented a collision of my seemingly polar worlds." [...]

Why we made STEM CELL REVOLUTIONS

Stem cells are much hyped – and genuinely full of potential for both medicine and biology.

I wanted to make a platform for the world class scientists who have devoted their lives to the discoveries of stem cells and what they can do. 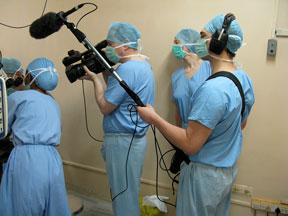 We created a collaborative working space where the scientists could take charge of what information was seen as important, how it should be contextualised, and what they saw as the most significant breakthroughs.

The result is a film of great clarity and precision: a surprising scope from World War II to the fifth floor of an eye hospital in India.